We recently ordered a new cargo bike, the Riese and Müller Packster. We got the long box, which they do not make a canopy for, so we’ll be ordering a custom canopy through Blaq but we recently got a chance to see the elusive R&M canopy for the short box Packster at G & O Family Cyclery in Seattle. It has two levels that the canopy can be left at.

The lower level is quite low. You can see here that it’s quite a bit shorter than the Blaq canopy on the Bullitt next to it.

And here’s my 80th percentile 18 month old sitting inside it. You can see that he’s only got a few inches over his head and he doesn’t even have a helmet on for these pictures. 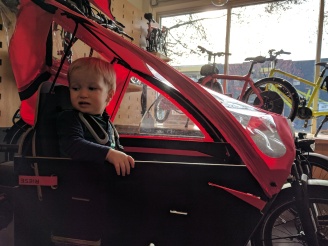 However, there is another level that the canopy can be set to, using the ropes in the back that hook it onto the box. This raises the canopy a good bit (~6″) though it does leave a small gap along the sides.

And when you see it next to the Bullitt cover again you can see that we’re now only looking at a few inches of difference in height (maybe ~3″) instead of close to a foot. The shape is still very different though. More aerodynamic than the Blaq cover but less space near the front of the box which would make it hard to add another kid at the front of the box or something like that.

I was not able to convince my son to get back in the box for more pictures with the canopy raised.

Overall I think it’s better than I was expecting based on the photos from the R&M website, but I’m not particularly disappointed that we don’t have the option of a R&M cover for the long box version that we ordered.